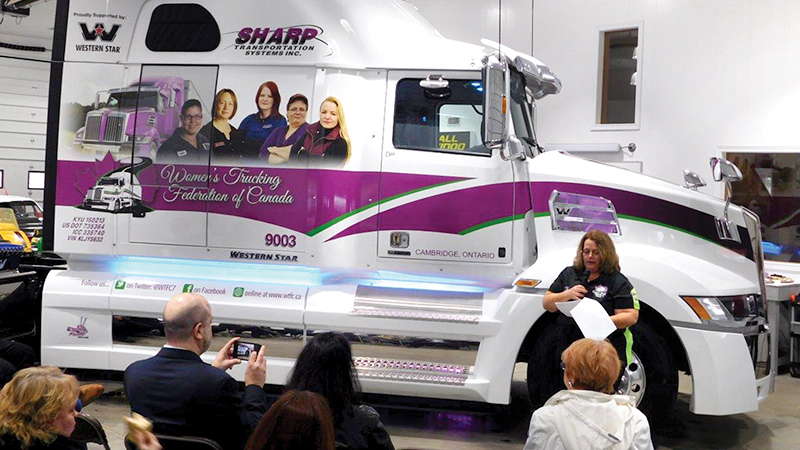 continues to grow, looks forward to 2019

Shelley Uvanile-Hesch has hauled everything from school kids to pharmaceuticals in her 26 years in the transportation industry. Now she’s logging countless miles across Canada for a different reason.

As chief executive officer of the Women’s Trucking Federation of Canada (WTFC), Uvanile-Hesch is pounding down the highway, attending conferences and training events, asking and answering questions, recruiting women into the industry, and looking for ways to help her members.

She never takes her eyes off her federation’s goal of making the industry a better place for women to work.

“We are a grassroots organization,” says Uvanile-Hesch, who has been a driving force behind the federation since it started in March 2016. “We are adding another voice to the table and our voice is the voice of the drivers. We bring the drivers’ angle to it. We don’t just whine, bitch, and complain. We are professionals, we care about our jobs, we care about the safety of others, and we have valuable input. We’re out on that road too and so are our families.”

The federation has come a long way since its inception. Its membership has grown from 20 in its first year to 300 this year, including 26 corporate members. “We are pleased with that number,” says Uvanile-Hesch. ‘Our numbers keep growing. We don’t have a set goal on membership. We believe that our membership will grow as our members do more and more things. Twenty-five percent of our membership is male. A lot of guys think it’s for women only, but we are not.

The distinctive 5700XE is adorned with pictures of women from within Canada’s trucking industry who share the federation’s message. Dubbed ‘Miss Destiny Star,’ the truck does double duty, hauling for Uvanile-Hesch’s carrier, Sharp Transportation, and spreading the word about opportunities for women in the trucking industry.

The federation is not set up as a lobby group although it does participate in industry discussions, prepares briefs on current topics, and offers its perspective on issues, from a woman’s viewpoint, if relevant. Uvanile-Hesch prepared a report on the shortage of parking for a recent study commissioned by the Ontario Ministry of Transportation through the Southern Ontario Truck Parking Survey. In its five-page brief, the federation added its voice to the growing chorus of concern facing truckers often forced to drive illegal hours because they have no place to park.

Uvanile-Hesch says the federation offered several practical, grassroots suggestions like opening closed-down weigh scales, allowing access to industrial parks, or putting up basic facilities. “In Alberta they put up truck-rests-only that can accommodate 50 or 60 trucks in them. They just have an outhouse building and a garbage dumpster. Drivers say they when they grab fuel later in the day, they can get a shower. I just need a place to park and I need a washroom. I am a human being.”

The federation has a broad mandate of fostering camaraderie, drivers helping drivers, empowering and building morale within the industry, and an emphasis on mentorship and recruiting. Although women make up 47% of Canada’s workforce, only 3% drive trucks for a living. In an industry plagued by a shortage of drivers, women represent a huge potential pool of drivers. But women continue to face some backlash in a male-dominated industry that has been slow to change. They also face some unique challenges.

“Women are more concerned with safety issues, but from a female standpoint. We find women are worried about the size of vehicles,” says Uvanile-Hesch. “They also worry about being away from home too long. Guys worry about that as well, but a lot of women have kids and they wonder ‘how can I juggle that career and my family?’”

She says attitudes toward women are better than they used to be, but there is still a long way to go. Part of her challenge is making carriers aware of the benefits of hiring and training women – not just to address the driver shortage, but because women are often safer drivers, are more loyal to the company, and are better communicators.

“If I have an issue, I will talk to my company about it. I am not screaming and swearing. I am raising a problem and asking what we can do to fix it. Men will often walk in throw the keys on the desk and say, ‘I quit.’”

In October, the federation took a major step forward by organizing an all-day training event, called Bridging the Barriers, held in Mississauga, Ont. The event featured speakers and panelists that addressed topics like cargo theft, harassment in the workplace, and how cannabis affects employers and employees. Attended by almost 100 people, the event was a first for the federation and a major step forward for the organization.

“This was an important event for us,” says Uvanile-Hesch. “We still quite often get asked what value we have to bring to the industry. Anybody at the event who still had that thought in their head – this event proved them wrong. Hundreds of hours went into this and we got excellent feedback. A lot of people think we should make it a two-day event.”

At the heart of the federation is delivering the message that the industry can offer women trades and jobs while minimizing obstacles. Federation members regularly attend college trade fairs and open houses, but the next step is to carry that message to grade schools.

“We have to stop the mentality of filling a (truck) seat now. How do we get kids interested in trucking when they don’t know anything about it? We have 26 corporate members and we hope that, in the new year, we can sit down with some of them and devise an interesting program and approach school boards.”

Meanwhile, Uvanile-Hesch will continue to roll up the miles in search of new ideas both inside and outside the industry.

“We’re talking to people about a self-defence session in the spring. It would be geared to different areas of the truck should a woman get attacked. I’m also looking at a small tracking device new to Canada. You can carry it in your pocket and if you run into danger you hit it and send a signal telling where you are and it dispatches police to that location.”

Of course, that’s in between hauling loads with Chris, her husband and tandem partner.