Join the Fight Against Human Trafficking 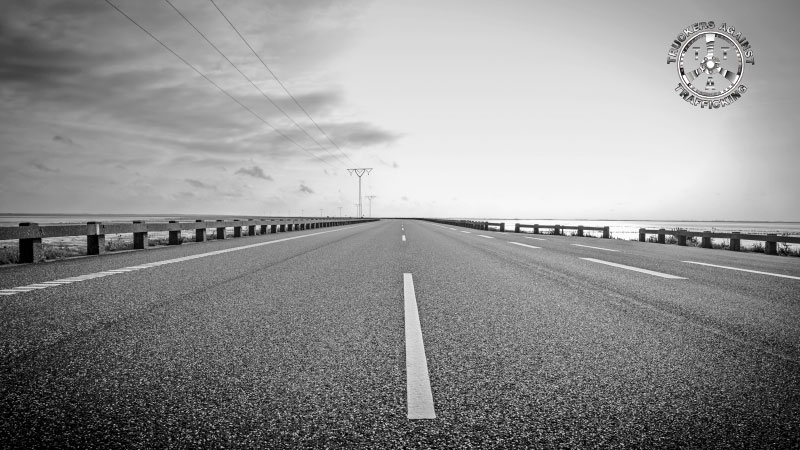 the truth was that she had suffered child sexual abuse from the time she was little, and then her grandfather began trafficking her. If she didn’t make the quota he’d set for her each day, he’d put her in a cage and starve her. He’d transport her to various locations to buyers in every profession from doctors, lawyers and judges to businessmen and fishermen. She felt unheard and invisible; nobody knew. (Listen to her story on the Driving Freedom podcast, www.truckersagainsttrafficking.org/drivingfreedompodcast.)

While the realities of human trafficking in Canada are heinous, professional drivers are uniquely positioned to disrupt this crime, simply by taking a second look and making a phone call. There are over 227,000 truck drivers countrywide, making trucking one of Canada’s top professions.

A variety of studies offer a glimpse into the reality of trafficking in Canada:

• The majority of reported trafficking cases involve the sexual exploitation of women and girls. From 2009 to 2016, 95% of recorded trafficking victims were women, 70% of which were under the age of 25, while 80% of traffickers were men between 18 and 34 years old.

• Traffickers can be individuals or members of organized crime networks, and trafficking occurs within communities, across regions and, in some cases, across borders. Trafficking has evolved over time from “individuals involved in street-level pimping […] to well-organized networks” that operate across many environments, including strip clubs, massage parlours, and private homes. These networks are loosely organized, cell-based structures, where individual traffickers control groups of women.

• In 2004, the majority of Canada’s human trafficking networks were located in the provinces of Ontario, Quebec, Nova Scotia, and New Brunswick. In 2018, the National Inquiry on Missing and Murdered Indigenous Women and Girls also noted organized networks operating in “city triangles” in the Prairies, including networks between Saskatoon, Regina and Winnipeg, and between Calgary, Edmonton, and Saskatoon.

• Indigenous women and girls, new immigrants, youth experiencing homelessness, and children in care are targeted by trafficking, because they are “socially and economically disadvantaged.” In a process called ‘grooming,’ young women and girls are targeted and lured through strategic manipulation and false promises.

A recent report by The Canadian Centre to End Human Trafficking found that traffickers are using transportation corridors to exploit more women and girls. By continuously moving through cities and provinces, sex traffickers keep their victims confused and unable to orient themselves, forcing them to rely on traffickers. The study outlines both inter- and intra-provincial routes that allow traffickers to move victims within and between provinces. Cars are the most frequent mode of transportation, with traffickers renting multiple vehicles throughout their travels.

Truckers Against Trafficking (TAT), an international non-profit working with members of the trucking, bus and energy industries to fight human trafficking as part of their everyday jobs, is in need of current data. Members of the TAT Canada Committee have recently distributed a survey to a few trucking companies seeking information around what type of commercial sexual activity drivers
are actually seeing and where they’re seeing it. Please contact TAT at
tat.truckers@gmail.com or 612-888-4828 if your company would be willing to distribute this survey to your drivers. This will provide critical knowledge in helping focus TAT’s counter-trafficking efforts in Canada.

Additional ways to join the fight include:

• Train your drivers with TAT’s Industry Training Program. More than a million drivers are already registered as TAT Trained. Through this training, Canadian trucking companies and their drivers, along with truck stop employees, will learn about the red flags of human trafficking and how to report these to the Canadian authorities. If you’re interested in training, please contact tat.truckers@gmail.com or visit TAT’s trucking training materials page (www.truckersagainsttrafficking.org/get-our-materials/#trucking-materials).

• Take a virtual tour of our Freedom Drivers Project, TAT’s mobile exhibit, at www.truckersagainsttrafficking.org/fdpcanada. This exhibit gives a visual and visceral glimpse into the world of trafficking and what trucking is doing to combat it.

• Adopt an anti-trafficking-in-persons policy with a demand-reduction focus (i.e., zero tolerance for buying sex on company work time or with company work product.

Sex trafficking – including sex buying – poses a risk to employers and harms vulnerable people in every community. Employers have policies and procedures in place to protect the company and employees from certain behaviors that create a hostile work environment, hurt the company’s reputation, reduce employee productivity or place the company at legal or financial risk.

National survey results by Demand Abolition show that up to 20% of adult men ages 18-64 have bought sex or would buy sex if the circumstances were right. 35% of men have searched online sex ads but failed to act on the desire. Data suggests that most men shop online ads during the workday, and many prostitution transactions take place on the way to work, during lunch or after work. Some transactions occur at the place of business or are set up using work issued property (e.g., cell phones, computers, credit cards, or vehicles). Employers can create policies that help mitigate the potential risk and protect employees from harm.

The corporate sector can play a critical role in helping to combat sex trafficking. Major transportation brands and corporations are positioned to leverage their industry leadership and economic influence to raise awareness to the issue – lending their support to efforts to create a culture and community that doesn’t tolerate sex buying.

TAT has materials, including videos, wallet cards, toolkits, posters and decals for Canadian companies and drivers with the Canadian national human trafficking hotline number, 833-900-1010, and the hotline number for the United States, 888-3737-888.

The Canadian ELD Mandate goes into effect June 12, 2021. What does that really mean?

All federally regulated motor carriers in Canada must equip commercial motor vehicles with a third party certified ELD device by June 12, 2021… or do they? Law enforcement will begin enforcing the mandate and issuing ELD related citations beginning June 12, 2021...
or will they?

There is a lot of confusion surrounding the Canadian ELD Mandate so I join you in trying to understand what’s myth, what’s reality, and what will happen when. Here is where we are.

As indicated by the Minister of Transportation, the Mandate will go into effect June 12, 2021. However, on March 2, 2021, he stated that the government will begin a phased enforcement rollout after June 12 that focuses on ELD education and awareness at first. Does this mean that drivers can continue to use paper logs? How long will this period of education and awareness last? Why have they decided to take this approach?

I’ve heard the terms ‘deferred enforcement,’ ‘progressive enforcement,’ and ‘graduated enforcement’ used in various industry-related circles to describe expectations; however, as of this writing, no related enforcement program has been shared – although we can expect that the Canadian Council of Motor Transport Administrators will provide a proposal within the next few weeks. There is no doubt we will be knocking up against the deadline before we have clarification.

I know there is a limited number of motor carriers happy to see a delayed enforcement program, as they’d rather continue using paper logs. Many others are unhappy as they have already made the investment in electronic logging devices and are simply waiting on an over-the-air update with the third- party certified ELD software.

The lack of clarity on the topic has a significant impact on those who are concerned if their financial investment has/will result(ed) in the acquisition of an ELD that will receive third-party certification. There are currently no certified ELD devices listed on the Transport Canada website, although many devices have been submitted for certification. With multiple ELD providers submitting multiple ELD devices to the one accredited certifying body, motor carriers must obtain assurance from their ELD provider that it is actively participating in the third-party certification process developed by Transport Canada. At a cost of nearly $50,000 USD per ELD submitted to obtain certification, the financial investment made by the ELD provider is a significant commitment and will be undertaken by a limited number of ELD providers.